No report on today’s big story from me, I’ve been busy making arrangements for my wife to transfer to home care after three months in hospital. She’s a long way from well, but will be happier here, with carers looking in four times a day. So here are some controversial reports on the Notre Dame fire. At this stage I do not believe any of them but I do not disbelieve them, we have no evidence on which to form an opinion.

But coming so close to the main Christian holy day in France, an attack on France’s principal religious centre at a time when attacks on Christian churches in that country are a daily occurrence, does lead those of us with a sceptical frame of mind to think that media attempts to explain away the catastrophe as ‘just an unfortunate accident’ stink of cover – up.

Update 2: Ever careful to watch for false-flags and conspiracy theory concerns, video is emerging of a Gilets-Jaunes in black clothes at one of the two towers half an hour after the start of the fire at Notre-Dame…

One definite way to disenfranchise the yellow vests – as they crush French autocracy – would be to set them up as the fall-guys for this national disaster. Surely that is not possible!

Update 1: A silver lining – if that’s possible: a Catholic priest was today hailed a hero as it emerged he entered the Notre-Dame last night during the height of the inferno to rescue precious cathedral relics including the Crown of Thorns.

The hallowed artefact, which symbolises the wreath of thorns placed on the head of Jesus Christ at his crucifixion, was stored in the cathedral’s treasury and was brought to Paris by French King Louis IX in 1238. Jean-Marc Fournier, Chaplain of Paris Fire Brigade, was also said to have saved the Blessed Sacrament last night from the 850-year-old Gothic masterpiece.

“Nothing indicates a deliberate act.”

Nothing? How about the surge of attacks on Christian and Jewish places of worship, business premises and individuals in France

French Church Is Ninth in Eleven Days Vandalised Across the Country 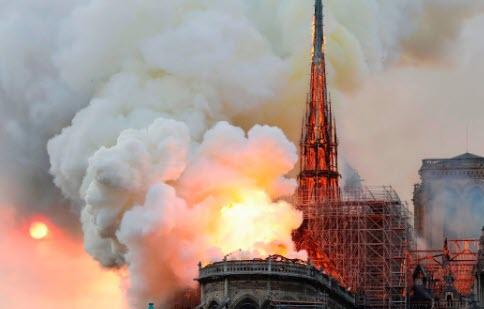 Time columnist Christopher J. Hale set off a firestorm of speculation when he tweeted that a friend who works at the cathedral told him “cathedral staff said the fire was intentionally set”…

Was he lying about what he had been told?

Coming from a professional journalist, that doesn’t seem likely.

Instead, it is much more likely that Hale quickly figured out that he said something that he wasn’t supposed to say.

A YouTube video that purportedly contains audio of Muslims celebrating the fire at the Notre Dame cathedral has also sparked a lot of speculation.  But at this point there doesn’t appear to be any way to verify the authenticity of the video.

But what we do know is that all of this comes at a time when churches all over France are being attacked.

On March 17th, the second largest church in France erupted in flames, and police later ruled that it was not an accident…

While Notre Dame is undoubtedly the most well-known landmark to be affected, Paris’ second largest church, Saint-Sulpice, briefly burst into flames on March 17, the fire damaging doors and stained glass windows on the building’s exterior. Police later reported that the incident had not been an accident.

Overall, a dozen Catholic churches were either set on fire or greatly vandalized during one seven day stretch last month…

A dozen Catholic churches have been desecrated across France over the period of one week in an egregious case of anti-Christian vandalism.

The recent spate of church profanations has puzzled both police and ecclesiastical leaders, who have mostly remained silent as the violations have spread up and down France.

Last Sunday, marauders set fire to the church of Saint-Sulpice — one of Paris’ largest and most important churches — shortly after the twelve-o’clock Mass.

And some of the vandalism that was reported during that seven day period was deeply, deeply disturbing…

In Nimes (department of the Gard), near the border with Spain, the church of Notre-Dame des Enfants was desecrated in a particularly odious way, with vandals painting a cross with human excrement, looting the main altar and the tabernacle, and stealing the consecrated hosts, which were discovered later among piles of garbage.

Likewise, the church of Notre-Dame in Dijon, in the east of the country, suffered the sacking of the high altar and the hosts were also taken from the tabernacle, scattered on the ground, and trampled.

Could it be possible that there is a connection between those attacks and the fire that just erupted at the Notre Dame cathedral?

That is a question that any decent investigator would be asking at this point.

We also know that anti-Christian and anti-Semitic attacks are on the rise in France.  Just check out these numbers…

Meanwhile in the same period, there were 1063 anti-Christian attacks, a slight increase on the previous year.

Needless to say, radical Islamists are responsible for most of the attacks against Christians and Jews, and the number of Muslims living in the Paris area has greatly increased in recent years…

According to reports, the number of Jews fleeing France for their safety has dramatically increased since 2000.

In one Paris suburb alone – Seine-Saint-Denis – 40 percent of the population is Muslim while 400,000 illegal immigrants also live there.

But in this politically-correct era, we aren’t supposed to talk about attacks against Christians, and this is especially true if those attacks are conducted by radical Islamists.

On Monday, even anchors at Fox News had apparently been instructed that any speculation about who started the Notre Dame cathedral fire must be immediately shut down.  These days there is very little difference between Fox News and the other major news networks, and that is very unfortunate.

On another note, I also find it very interesting that at one point on Monday a YouTube algorithm linked the fire at the Notre Dame cathedral with the 9/11 attacks…

A YouTube feature designed to combat misinformation offered some of its own during a major news event Monday: It linked the fire at the Notre Dame Cathedral to the September 11 terrorist attacks.

The company blamed the mixup on its algorithms. It removed the links on all Notre Dame fire posts after the issue was flagged.

In this day and age, the “spin” is often more important than the actual events themselves.

In the coming days, a tremendous effort will be made to get us to feel a certain way about the Notre Dame cathedral fire.

The Internet was one of the last bastions for global free speech, but now the heavy hand of censorship is descending, and our ability to freely discuss global events is eroding a little bit more with each passing day.

Notre Dame would not have burned as it did without the explicit complicity of the Church — and key police, fire, and government offices in Paris — in detail, in advance, and into the future.

Here is what I have been told by a ranking source in France:
Extraterrestial View of the Satanic Sacrifice Site

01 Canadian intelligence officers who went immediately to the site for a first hand look were prevented from getting close.

02 No electricity in the area where the fire is alleged to have started.

03 Two dead within the fire, both evidently murdered (two bullets each)

04 No helicopters brought in to fight the fire

05 Dysfunctional water spraying machine, a mockery of a fire-fighting performance

06 Official narrative pretending it was an accident was immediate and clearly on the shelf and ready to go.

07 Timing impossible to dismiss — intended to prevent announcement of Macron’s loss in the national debate inspired by the Yellow Vests.

08 Afternote A: anniversary of the Titanic that was precursor to the creation of Central Banks and the subversion of all governments.

09 Afternote B: This is intended to save the global financial system owned by the Satanists by saving the European Election in May, anticipate a call for “financial solidarity” that keeps France trapped in Europe by “EU” agreeing to pay for the renovation of the cathedral. “EU” and Central Banks are the beneficiaries of this false flag event, along with Macron as the token leader of France on behalf of the Satanic Deep State.

10 Afternote C: This is an intended “death blow” against Western Civilization. Although the Muslims are not being blamed, the sub-text is Frankfurt School / Tavestock Institute fundamental: whites and the West are shit, hail all illegal immigrants, transgenders, and fat stupid people — the sheep of all sheep.

11 Afternote D: The roof of Notre Dame was original to the 13th century and has survived all wars, all manner of natural hazards. This was the single most precious asset in France, not so much a Catholic religious asset as a national spiritual cultural asset. Final conclusion: the Satanists are DESPERATE.
Notre Dame burning early on, fire brigades evidently held back

Separately I am told by sources in Asia with access to secret society leaders:

01 This was a Satanic Easter energy sacrifice by Satanists Macron, Merkel, and May, each believed to be an individual Satanist (and pedophile and sacrificer of children in ritual torture ceremonies). Each has their own major secular physical world failures pointing toward their Earthly demise.

02 This was assuredly done with the complicity of the Pope and the Catholic Church hierarchy, the two dead may have been murdered because they would not comply with Satanic instructions. This was not an accident, this was an inside job with outside (French national police) complicity in closing the area off and preventing effective responses from being coordinated. For the existing plan to blanket this sacred site with water to not have been executed instantly is the equivalent of Dick Cheney controlling NORAD on 9/11.

03 The coincidence of Steve Bannon setting up shop in an Italian monastery and calling the Pope an enemy with the timing and scope of the fire (total destruction) is considered just that — a coincidence.

04 The Pope’s incentive — apart from being a Satanist for whom God is the enemy and Notre Dame a lovely sacrifice to Satan — is said to revolve around the WikiLeaks dump and the exploding pedophilia scandal that if properly investigated would lead to every single cardinal and most bishops being defrocked, and the arrest of Assange.

If I was a betting man, my guess is this Notre Dame Cathedral fire was a “Kristolnacht” type of psyop event, similar to when the Nazis ignited the 1930’s fire and blamed the communists to win the election….my guess is this is similar, with Macron benefiting by shutting down the yellow vest protests (which have been destroying him and putting France in civil war. Who benefits from the fire? well perhaps Israeli Mossad and/or Shin-bet doubling-down on their “religious war” between Muslims and Chrisitians as may have been the case in the “Chr*st-Ch_rch” NZ event and the fake video of the guy running around like he’s in a video game with fake weapons, etc. A renewed religious war is always good for the military industrial complex. Perhaps they might even try and blame it on Iran–but most likely would have been MEK if it was anyone, working with MI6-CIA. Just another day in the police-state.

Notre Dame Cathedral in Paris on Fire, Worker Claims it Was “Deliberately” Started

The official story [Credible false flag reports are being censored]:

“There is to be a particular insult, which will be inflicted upon My Holy Name, in an effort to desecrate Me, during Holy Week. This wicked gesture, during Holy Week, will be seen by those who keep their eyes open and this will be one of the signs by which you will know that the imposter, who sits on the throne in My Church on earth, does not come from Me.”

STATE OF THE NATION: NOTRE DAME CONFLAGRATION: Gladio Strikes at the Heart of Paris and Soul of the French People