Little Nicky loves a bit of irony and this is classic. 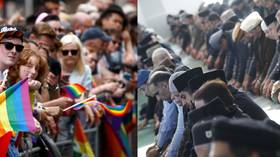 Acceptance of gay sex and pre-marital relationships has fallen for the first time in decades in the UK, but the media is insistent on blaming the wrong people for intolerance.

The annual British Social Attitudes (BSA) survey has found that 74 percent believe that sex before marriage is “not wrong at all,” a percentage point less than last year, and 66 percent of adults say the same about same-sex relationships. While the declines are marginal and the numbers remain near historic peaks, the last time Britain grew less tolerant of homosexuals was during the AIDS panic of the late 1980s, and researchers state that openness has “plateaued” after years of rapid growth.

If in doubt, blame Brexit

The left-of-center media took no time to identify the reasons: the Guardian’s article on the subject features “Ukip, the Brexit party and the European Research Group (ERG) of Conservative MPs,” Arlene Foster of Northern Ireland’s DUP, “senior Conservative politicians including Andrea Leadsom and Esther McVey” and singles out Jacob Rees-Mogg, even though he doesn’t actually oppose same-sex relationships. In any case, one is left wondering why millions of Britons are suddenly taking their social cues from a Catholic father-of-six raised in a stately home by his devoted nanny. The Independent goes through much of the same list, throwing Theresa May and Boris Johnson into the mix, while on Sky News an LGBT activist said that Brexit had “emboldened” social conservatives. 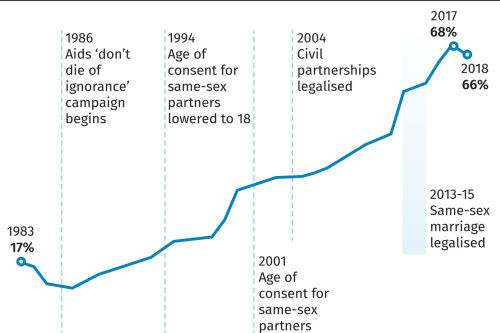 A more sophisticated thesis claims there is a backlash against the rapid progress of LGBT rights and other liberal causes that have become visible everywhere from shop fronts to street parades to politicians’ lapels, and sites that have left comments on are full of opinions from those claiming to be sick of alternative lifestyles “rammed down their throats.” As recently as 2012, fewer than half of Britons told the same survey that there was nothing wrong with homosexual relationships, so perhaps some of the defections to the rainbow flag may have been fleeting.

But the more obvious answer appears to be hiding in plain sight, in black and white, in the survey itself.

For example, fewer Catholics (82 percent) believe that premarital sex is “rarely wrong” or “not wrong at all” compared to those who do not follow any religion (93 percent). But the real social conservatives are not the old or the Christians, but a grouping of “Non-Christians” only 35 percent of whom believe that sex before marriage is acceptable. 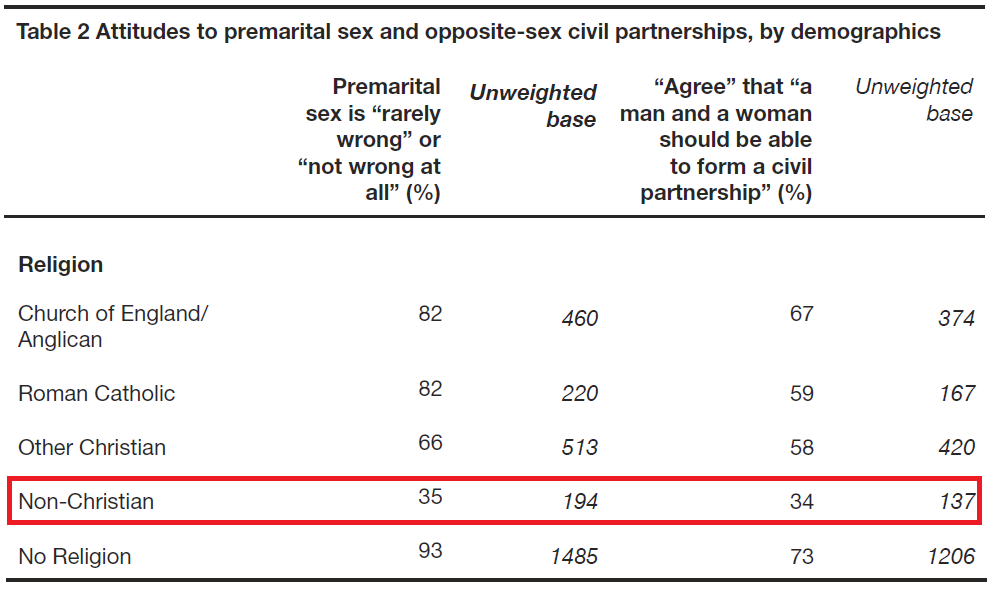 The picture is likely the same for same-sex relationships, though for reasons unknown the survey withholds a detailed breakdown of who exactly is against gay sex. But using the figures of 2016, which are available, only 30 percent of those non-Christians make allowances for LGBT couples – with acceptance rates 20 to 30 percent lower than Christian denominations, and even further behind atheists. Even if that number has improved against the overall trend, the group likely remains laggards. When LGBT advocates talk of a hardened rump that won’t fall in with other social trends, this is who they should mean.

So, who are these statistically interesting outliers? In the majority of cases, Muslims, with significantly smaller Hindu, Sikh and Jewish groups.

Using data from the BSA survey itself, the proportion of Muslims has doubled in the past decade alone from 3 to 6 percent. Government statistics estimate that there are over 3.3 million Muslims in the UK, more than twice as many as in 2001, with the real number thought to be higher as many migrants are not counted in such figures.

It might not seem like a lot, but if this group is radically different in its social attitudes it is enough to put a dent in the steady line of progress for tolerance, as it grows proportionally bigger.

Other than the specific example of parents in Birmingham schools protesting against a new pro-LGBT curriculum, there is no acknowledgement of the impact of Muslims as such, or of their changing demographics on overall British attitudes in any of the reports. Similarly, the Independent writer talks about “an atmosphere of hostility creeping into our lives” and complains that he has “been subjected to a huge number of homophobic comments recently and several friends of mine have been assaulted or attacked” but doesn’t reveal who is behind these aggressive acts in London, a city with the highest “non-Christian” population.

Lefties love to shout their support for Gay BLTs from the rooftops. Likewise their love for Muslims and all things related to Islam (except the bits of Islam they are in denial about of course.) They’ve been so keen in both Gay / Lesbian / Trans rights and the acceptance of Islam, including Sharia Law, in British society that they have campaigned for both simultaneously just as they have campaigned for tolerance of perverts, druggies, criminals, gangstas, and members of the Jew – hating Labour Party.

Ironically homosexuality, sex outside marriage and any kind of drug use are crimes in Sharia Law, the first two so serious they are punishable by death.

Little Nicky and his friends over at Boggart Blog have often wondered how the lefties would react when the muslims they campaigned to introduce into British society started to turn on the Gays, Lesbians, Bisexuals, Transexuals and Qs, whatever they are. Because ‘tolerance is a word that does not figure largely in The Koran.