Former US President, Community Organiser and professional cocksucker Barack Hussein Obama has signaled his iintention to set up what amounts to a shadow government dedicated to bringing down the administration of Danald Trump. He also said said he is heartened by the level of engagement taking place in (ethnic minority) communities around the country against Trump.

This all points towards the conclusion that Obama is still throwing the mother of all hissy fits because his anointed successor, war loving Hillary Clinton was beaten in the election, and that the former president will now try to cause social chaos, iner – racial conflict and civil unrest in order to save his Muslim terrorist supporting, gay, lesbian and transgender friendly agenda. In his delusional mind he always had the full support of more than 100% of Americans and he believes they will rise up against democracy in the United States and trigger a civil war. Here is a map of the United States that is circulating after California submitted a petition to secede from the United States. 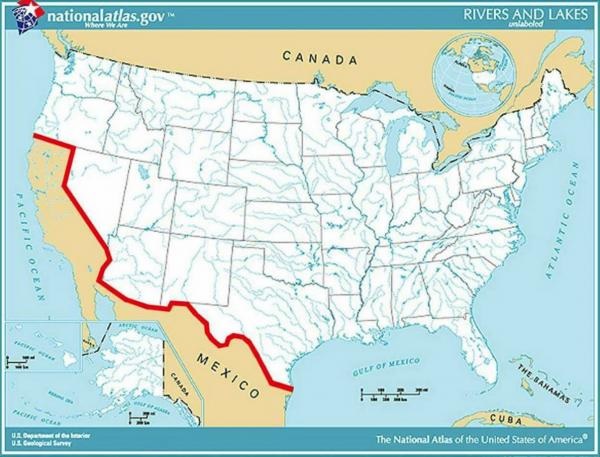 There is undoubtedly a planned coup forming among the loonier cohorts of the Democratic Party and liberal media, seeing their direct sales and advertising revenue evaporate, are fully behind it. Neither mainstream media nor the establishment will accept Trump and many people are determined to destroy the government as we have known it. Former Deputy Attorney General Sally Yates obviously pulled a political move by declaring that she would not execute Trump’s ban on people from the selected countries entering the USA. She has no problem arresting aliens and deporting them under Clinton era laws.

Trump’s executive order would only mean deporting someone on the next plane that tried to come in to the USA who was not a legal resident. They would not be arrested or put in prison as Clinton’s laws mandate. And the order was only for 90 days, to allow proper border controls to be restored, after Obama ordered that all people from terrorist states should be ‘waved through’. What was Yates up to? Obviously her move was a political and for that Trump rightly her. She is a disgrace to her profession.

The Trump ban is temporary, except on Syria, ranging from 90 to 120 days giving time to make sure the criteria is valid. Try going to India from Thailand. They will not let you in. You have to go back to your home country to apply for a visa. Try going from the UK to Nigeria withour proper travel documents. There are no open borders where you just go without agreements between countries. Americans could not go to Cuba for decades. Why is this temporary ban being misrepresented by liberal media to discredit Trump? It is noticeable Obama only opened US borders to people from nations where a gangster culture prevails, organised crime is rife and Islamic extremism makes a mockery of civilised western values.

The liberals and progressives could care less about the issue of aliens. They even try to call this a “Muslim” ban which it is not. What Obama, other Democrat politicians and mainstream media are trying to do is really more about creating political unrest designed to overthrow the Trump government.

European Union member states, bullied by Germany, opened their borders to the Middle East ONLY because Merkel’s polls were negative because of her harsh treatment of Greece. It was her personal decision for her own career that created the immigrant crisis in Europe and all the new terrorist attacks, rapes, and decline in security. Obama jumped in and said the USA would also accept these migrants claiming to be refugees when it was the USA bombing that turned them into refugees in the first place.

For the past 100 years every outgoing US president has packed his bags gone home and not passed comment om his successor. This is not what the Obamas are planning to do. They rented an eight-bedroom mansion in an upmarket suburb of Washington, close to other senior figures in the Democrats. Bizarrely Valerie Jarrett, Obama’s chief of staff and most favoured adviser moved in along and Michelle and the kids (and presumably Reggie Love, allegedly Obama’s gay lover).

The Obamas claim they are staying in Washington because the children want to stay in D.C..

According to insiders who are not fans of Obama and not in the pay of The Clinton Crime Syndicate that’s not the real reason they are staying there. Despite what the president said in his press conference, he’s in a sense of outrage over this incoming Trump Administration, which he thinks is going to wipe out his gay / trans friendly, terrorist supporting legacy. So he’s setting up this shadow government, picking people in foreign affairs, labor, abortion, union matters and setting them up to start appearing on television, making speeches and doing op-ed pieces for next four years, you’re going to see not only a Trump Administration but you’re going to see a shadow government opposing the Trump…

The attempted coup by the left started on Inauguration Day with the mass demonstrations organized by fat slob Michael Moore. Then classless, lowlife and allegedly chck-with-a-dick Michelle Obama whined on Oprah that Americans have lost hope.

Obama’s Gone, But His Genocidal Wars Go On

The Unreported Scandals Of The Obama Administration

Obama’s Farewell – The World Breathes A Sigh Of Relief

Obama and The End Of Utopia

Without His Teleprompter Obama Becomes A Gibbering Idiot

Goodbye To The Biggest Threat To World Peace Since Genghis Khan

In The End Days Obama’s Bizarro World Gets Crazier