(From today’s issue of the Tom Woods Letter. Subscribe for free, and get a free libertarian eBook at the same time, at TomsFreeBooks.com.)

That’s an odd topic to write about, but I was reminded of Marx’s poems today by way of contrast with a left-wing poem I read that was just awful, lifeless and bland.

(I’m sparing you that one.)

At least Marx was bold and creepy.

Murray Rothbard quoted from Marx’s poems in his book Classical Economics. Rothbard was unconvinced by those who say these poems were the products of a youthful Marx, and of no significance in understanding the man.

… Worlds I would destroy forever,
Since I can create no world;
Since my call they notice never …

Then I will be able to walk triumphantly,
Like a god, through the ruins of their kingdom.
Every word of mine is fire and action.
My breast is equal to that of the Creator.

I shall build my throne high overhead
Cold, tremendous shall its summit be.
For its bulwark — superstitious dread
For its marshal — blackest agony.

See this sword?
the prince of darkness
Sold it to me.

With Satan I have struck my deal,
He chalks the signs, beats time for me
I play the death march fast and free.

… I shall howl gigantic curses on mankind:
Ha! Eternity! She is an eternal grief …
Ourselves being clockwork, blindly mechanical,
Made to be the foul-calendars of Time and Space,
Having no purpose save to happen, to be ruined,
So that there shall be something to ruin …
If there is a something which devours,
I’ll leap within it, though I bring the world to ruins-
The world which bulks between me and the Abyss
I will smash to pieces with my enduring curses.
I’ll throw my arms around its harsh reality:
Embracing me, the world will dumbly pass away,
And then sink down to utter nothingness,
Perished, with no existence — that would be really living!

Nah, I’m sure none of that has anything to do with the mature Marx at all.

Sure does explain a lot, though — about Marxism and about the forces we’re up against these days.

Potpourri:
(1) I lovingly crafted a free eBook, based on my own experience, on different ways to generate dough online. Good antidote to those Marxian poems. It’s yours for the taking: http://www.PathsToIncome.com

(2) As usual, the Tom Woods Show will take a break at Christmas. Last episode will be released on December 22, and we’ll resume on January 3.

Leftist Identity politics operate on the idea that everyone belongs to an identity group, and all of those groups are brutally oppressed by “The White Patriarchy.”

The idea is that since they are oppressed, they deserve extra rights and privileges in order to “defend themselves.”

The problem is that they ran out of things to be oppressed by, so they had to invent “micro-aggressions.”

Micro-aggression are tiny little insults that are CRUSHING the “marginalized people” like a Nazi steamroller (!!!)

THE LIST OF MICRO-AGGRESSION GOT RIDICULOUS A LONG TIME AGO.

I saw an article by an SJW in the Harvard newspaper where the writer complains bitterly that he is oppressed by the mere presence of white people.

(You’d think that getting a $350,000 college degree would take the sting out having to be around white people, but nope.)

I just got done listening to a debate where two college professors said that they should have the right to censor free speech, because free speech is largely a tool of white men and that they literally are fighting for their very lives (!!!) each day at their incredibly liberal colleges.

It all amounts to a cynical power grab by poisonously hateful, tribal people. 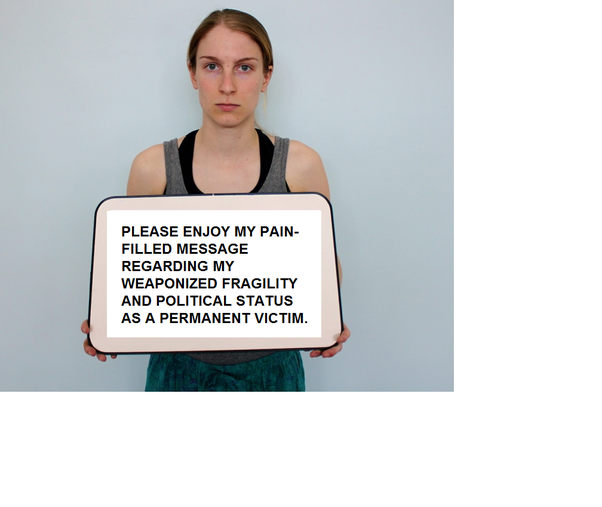 The other problem that SJW face is that they love PURITY TESTING.

No matter how liberal you are, you’ll never be pure enough for them.

There was a lefty-ish college professor at Evergreen College who taught evolutionary biology.

Evergreen is an off-the-charts progressive Taliban zoo of a college and the college president is like a self-parody of a self-loathing white leftist.

Evergreen decided that all white people should be disinvited to campus for a day, so the minorities could enjoy a day of not being oppressed by their toxic, oppressive presence.

The biology teacher, Brett Weinstein, wrote an email saying that he thought it was a bad idea and that he was uncomfortable with the concept.

The SJW Army went completely berzerk and tore the campus apart, the guy and his wife had to flee the campus for their physical safety.

The chief of campus police resigned because the Marxist college president would not allow the police on campus to protect the safety of the faculty and students from the mob of SJWs.

The college president allowed himself to be held captive by the mob and meekly asked them if he could use the bathroom.

THE SJWS LITERALLY WANTED TO HOSPITALIZE THE PROFESSOR AND HIS WIFE BECAUSE HE WASN’T MARXIST ENOUGH AND SELF-LOATHING ENOUGH TO SUIT THEM.

Unfortunately for the SJW thugs, the professor turned out to be a courageous and extremely well-spoken guy and he made their thuggery famous.

You’ll never be pure enough for the SJWs until you have green hair and 14 cats and you parrot their new-speak down to the very last syllable.

Are you a white left-leaning feminist who voted for Hillary? Not good enough. Sooner or later you’ll be fed into the Purity Wood Chipper.

When Feminism Is White Supremacy in Heels

Today, February 1st is apparently World Hijab Day. This is the latest demonstration of the abject stupidity of liberal feminists and inevitably has its very own hashtag: #StrongInHijab. Most of the usual suspects, the self righteous virtue signallers and professional hypocrites, politicians showbiz luvvies and media sheeple are jumping on the bandwagon, in the name of “Womens’ right to choose.”
What makes this a day which ranks as one of the most sickening displays of virtue signalling is that privileged middle-class Western feminists are lining up to display their multicultural credentials by donning a hijab as a fashionable symbol of liberation. In order to be seen to support Islamic human rights 110%  they pretend to be ignorant of the brave women in Iran and other places in the Middle East where women are literally risking their lives to remove the hijab. To them it a hated symbol of oppression. The Iranian regime has decreed it compulsory for a woman to cover every part of their body apart from their face, and wearing a hijab is thus compulsory.
Yes on this very day, while western poseurs are fighting for Muslim womens’ right to wear the hijab, in Iran, Saudi Arabia, UAE and all around the Islamic world women are being stoned or flogged for demanding the right NOT to wear the hijab. Punishments for removing a hijab in Islamic societies can be brutal – Islamist regimes are known to physically beat women for non-compliance with their dress codes. This is true not only in the Middle East but is increasingly becoming accepted in the name of multiculturalism in the West.
British Prime Minister Theresa May has joined in the chorus of the self-righteous and added her voice to the celebrations. Teresa The Appeaser told the House of Commons that “a woman should be able to wear whatever she wants”. As ever the very worst kind of hypocrite, May makes absolutely no mention of women who do not want to wear a hijab and are regularly arrested, imprisoned or somehow forced to by huband, Imam or religious police for not wearing one.