He promised he would be the peacemaker, the great conciliator, the leader who would usher in a new post – conflict global age. And may believed him. Oh how they mocked when Little Nicky predicted Barack Hussein Obama would be a warmonger, a divider and more than any of his predecessors they lackey of the neo Nazis who are pushing for a global totalitarian government. 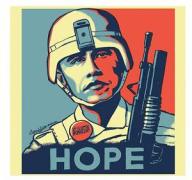 The drone – strike President, Barack Hussein Obamas terse notification to the U.S. Congress last week that American troops are being deployed to the northwest African nation of Niger confirms that a whole new stage in the imperialist recolonization of Africa is now in progress.
How did they get involved in Niger, you might well ask? Predictably the story was not mentioned by mainstream media where the official lined toed by all still pushes the peacemaker who walks on water bullshit, so your guess is as good as mine but mine is that like the recent incursion into Mali, a problem was being created by locals who don’t much want to co – operate with the New World Order and whose tribal lands sit on top of some strategically important minerals.

The dispatch of the first 100 troopswith hundreds more reportedly to followis bound up with a deal signed last month between Washington and the Niger government allowing the US military to set up a drone base on the countrys territory, creating the conditions for spreading the Obama administrations remote-control killing spree to exterminate rebels not just in Niger itself but Mali, Chad and throughout the region.

The deployment of US forces in Niger comes in the immediate wake of last months French action in neighboring Mali, carried out with critical US logistical and intelligence support, and aimed, in the words of French Defense Minister Jean-Yves Le Drian, at the total reconquest of the former colony. Interesting phrasing there.

Officials in Paris and Washington have justified their military incursions into the African continent in the name of defeating Al Qaeda and associated organizations in Africa. British Prime Minister David Cameron chimed in last month, warning that the prosecution of this war in Africa could span decades. Perpetual war as per Orwell’s 1984?

The glaring contradiction between this pretext for war in Africas Sahel region and the line-up of former colonial powers behind Al Qaeda-linked militias in the sectarian-based war to overthrow the Assad regime in Syria is passed over in silence by the media and the political establishments as we would expect.

All this is playing out just as Little Nicky Machiavelli said it would. My more famous ancestor invented the game these nonentities are playing.

How many of you out there who protested against my non interventionist stance, saying we must intervene on humanitarian grounds are now starting to think “Oo – er, Little Nicky was right, these military interventions were never anything to do with humanitarianism.